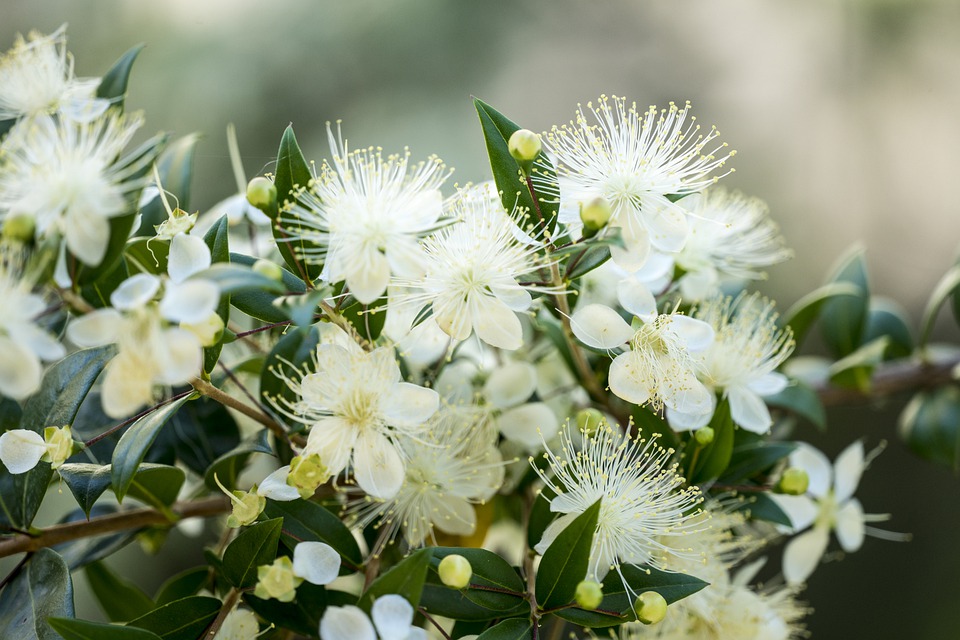 Three months had passed since the preceding vision, and the month Sebat had come, when the trees begin to shoot, and Zechariah says, „I saw by night.“ What did he see?
If we may be allowed to follow the suggestion of one of the commentaries, we may imagine that not far from the prophet’s home there was a green valley, or bottom, filled with graceful myrtle trees, amid which a water-course had its way. Thither he may have been accustomed to resort for prayer, as our Lord retired among the olive trees outside Jerusalem. It is conceivable that ever since the return of the exiles from Babylon he had paced this green glade, pouring out his heart in words like those which were afterward uttered by the Angel-Intercessor : “O Lord of Hosts, how long wilt Thou not have mercy on Jerusalem and on the cities of Judah, against which Thou hast had indignation these three-score and ten years?“

It is pleasant to pray in the open field of nature; the expanse above is suggestive of eternity and unchangeableness, and all the sounds of Nature’s varied orchestra, from the rustle of the wind among the leaves to the long-drawn wave-beat on the sand, are marvelously adapted to be an accompaniment to the voice of supplication.
There was a special significance in the presence of the myrtles which grew in humble and fragrant beauty around. The myrtle was a native of Persia and Assyria. Esther’s name, Hadassah, meant myrtle. It was, therefore, significant of the return of the exiles from the lands of the north; and its humble beauty was an appropriate symbol of the depressed condition of the chosen people, who could no longer be compared to the spreading cedar, or the deeply-rooted oak, but were like the myrtle, which, though graceful and evergreen, is neverthe- less an inconspicuous and unassuming plant. Many believers are as the myrtle. Their heart is not haughty, nor their eyes lofty ; neither do they exercise themselves in great matters, nor in things too wonderful for them. They still themselves, as a child weaned from its mother; and their hope is in the Lord for evermore On the night in question, which may have fol- lowed a day of unusual exercise of spirit, Zechariah thought that he was in his favorite valley, sur- rounded by the myrtles ; and behold, in the midst of them, ‚*a man riding upon a red horse; and behind him“ there was a group of companions, mounted on horses, red, sorrel, and white. The whole valley seemed alive with these mysterious figures. They had doubtless been there whenever the prophet had paced to and fro, or knelt in intercession ; but never before had his eyes been opened to see them. Ah! how perpetually are our eyes holden, so that we do not perceive the bands of God’s marshaled angels gathered to our succor. The fountain rises from the desert sands, on which our Ishmaels are dying for thirst; but we perceive it not. The mountains are full of horses and chariots of fire; but we tremble as though there were nothing to prevent the enemy making an end of us. The glorious Lord engirds us, as a broad river with its flashing surface might encircle a city; but only to the anointed eye is his defensive presence made manifest.

Naturally the prophet’s curiosity was excited, and he sought the significance of the heavenly vision. ‚Then said I, O my Lord, what are these?“ This inquiry was addressed to a celestial Friend and Adviser, with whom Zechariah was in constant fellowship. He often alludes to him as “the Angel that talketh with me“ (9, 14, 19; iv. i, 4, 5; v. 5, 10; vi. 4). This celestial visitant must be distinguished from „the Angel of the Lord,“ referred to in verse 12, and who could be none other than the Angel of the Covenant, our blessed Lord Him- self, to whom, also, the riders gave in their reports (10, II).
It has often been the comforting reflection of individual saints that their lives were under the direct tutelage and care of guardian angels. Still God gives his angels charge over us to keep us. Still He sends his angel before us, to bring us into the place that He has prepared. Still the interpreting-angel talks with us — or, as Jerome says, within us — and says, „I will show thee what these be.“

The holy soul, which has its myrtle valley for prayer, and has been accustomed through long years to pour out its intercessions and supplications before God, though it may have been with small response, is the one for whom presently the veil shall drop from the invisible world; and in that rapturous moment the anointed eye will be opened to behold the ministries of God’s high angels, as they go to and fro throughout the world on his embassies; whilst the purged ear will become the auditor of their elevated converse as they discuss the affairs of men, and especially of those intercessions with which Christ pleads for his own. „The man that stood among the myrtle trees answered and said, These are they whom the Lord hath sent to walk to and fro through the earth.“ Then, as the prophet waited and listened, he heard the report which the angel-scouts handed in to headquarters, one in which they agreed with perfect unanimity: *’We have walked to and fro through the earth, and, behold, all the earth sitteth still, and is at rest.“
It was a time of almost universal peace. The new empire of Cyrus had become securely settled, and beneath the strong rule of his successors there was a grateful cessation of the throes and convulsions which had ushered in the fall of the empire of the Chaldeans.
But to the peace and prosperity of all surrounding countries the condition of the returned remnant presented a notable and strange contrast. If any spot should be verdant and radiant, surely it should be the hill which the Lord had chosen for Himself; and yet it was desolate. This astounding contrast elicited from the Angel of the Covenant an earnest entreaty that God would show Himself strong on behalf of those whom He had brought back from the land of the enemy. *’He answered (as though He were speaking to the prophet’s thoughts) and said, O Lord of Hosts, how long wilt Thou not have mercy on Jerusalem and on the cities of Judah?“

This is a beautiful glimpse of the intercessions which emanate from our Lord’s unchangeable Melchizedek priesthood. The believer having viewed Him in his Aaronic ministry, by which He put away sin through the sacrifice of Himself, derives great comfort from considering Him as a Priest forever after the order of Melchizedek; having no begin- ning of days nor end of life, but abiding a Priest con- tinually, and ever living to make intercession in the heavenly temple for his people. „Simon, Simon, Satan hath desired to have you, that he may sift you as wheat; but I have prayed for thee.“ What un- told benefit accrues to us from his ceaseless and prevalent prayers!

„And the Lord (i. c, the Angel of the Covenant) answered the angel that talked with me with good words and comfortable words.“ It was as though the Father had heard and answered the pleadings of the Son, and returned Him an answer, which he passed on to Zechariah’s angel-guide; and then the prophet in turn was bidden proclaim them with the urgency and insistence of a cry: „Thus said the Lord of Hosts : I am jealous for Jerusalem and for Zion with a great jealousy.“

More disclosures of God’s will followed ; that He was displeased with the nations, who had gone be- yond his commission; that He had returned to Je- rusalem with great mercies; that the holy house should be built again; that the line of the builder should be stretched again over Jerusalem; that the cities of Judah were his cities, which should yet be spread forth in prosperity; that the Lord should yet comfort Zion and choose Jerusalem.
Zechariah awoke; and, behold, it was a dream. But was it not more? Did he not visit that valley at daybreak with new and awful wonder? And did not the people, when they heard what he had seen, and the message which had been communi- cated to them, pluck up new courage to prosecute toils? If God was with them, who could stand against them? If angels were encamping round Jerusalem, how inevitable would be her resurrec- tion from encumbering ruin! The return of God to his city meant her return to the beauty that had attracted the wonder and jealousy of the world (Psa. xlviii.).

These words may come under the eye of some who have sighed and cried over the desolations of the house of God, whether of the universal Church, or of some beloved sphere of labor, on which they seem to have expended prayers and tears in vain. Have such waited for fifteen years as Zechariah did? Have they had their myrtle grove of supplication? Have they remained steadfast and unmoved amid universal surrounding declension? If they could hear the good and comfortable words that are being spoken, how glad and thankful they would be! For when men and women pray like this, they do but echo the prayer of the great Intercessor yonder, and their prayer is the sure precursor of the return of God to his heritage with great mercy. Whenever God lays the state of his Church on the hearts of his people, so that they travail in birth for it, a powerful revival of his work is at hand.

Are you, my reader, desolate through the pressure of long-continued sorrow? God’s chastenings have been greatly exaggerated by those who have helped forward the affliction. What was once a busy scene of active service is waste; your home is desolate; your heart sad. Yet, be of good cheer! There is One that ever liveth to intercede. Jesus has graven you upon the palms of his hands. Your sad lot is ever before Him. He will yet talk with you with good words and comfortable ones:

‚Turn“ — they are his own words — „O backsliding children; for I am married unto you, saith the Lord.“ „I will heal their backsliding, I will love them freely; for mine anger is turned away.“ “He is able to save them to the uttermost that come unto God by Him, seeing He ever liveth to make intercession for them.“